Guest Post: Diane Bramos and Trout with Almonds, Grapes, Quinoa, and Kale with a Lemon-Marjoram Vinaigrette

posted on October 21, 2010 by Adventuresgfmom

I am really excited to share my first guest post with you today!  I “met” Diane Bramos quite some time ago on Twitter, when she was still known as @pilateschik (Diane’s new Twitter name is @MrsAwwsum), and we have had many wonderful gluten-free “life conversations” ever since.  I love Diane’s enthusiasm for leading a healthy gluten-free life and her attitude is downright infectious!  Diane is the beautiful wife of Dan and mother of two happy gluten-free kiddos.  She does a phenomenal job of showing how a healthy gluten-free life can be a lot of fun…once again proving that attitude is everything! 😀 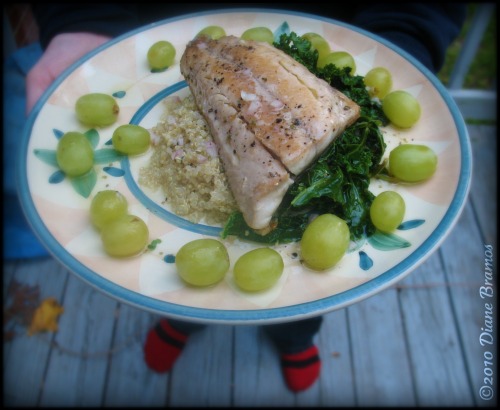 Do You See What To Do With The Almonds?

Thank you, Heidi, for allowing me to take over and write all over your blog!!  I love cooking and experimenting with food.  We lived in Sicily (where daughter was born) for three years.  I was huge.  I had stomach issues.  But, I LOVED their food and learning how to make it!  My name is Diane Bramos and I am a Celiac.

I have had stomach troubles ever since I can remember.  I always wanted to be “normal,” which to me, meant not having to be near a bathroom.  College was terrible since we shared bathrooms. When I finally married my love, Dan, I was lucky enough to learn how great military medicine can be *sarcasm.* I was first diagnosed with IBS, whatever that meant.  I was not given any information.  We moved to Sicily, then back to the States and I just quit pursuing the issue since I would always be deflated with an IBS diagnosis.  By this time I had two children so it was harder to find a babysitter and see a doctor.  We would eat boxed foods like Kraft Macaroni and Cheese, Campbell’s Soups and Wonder bread.  I was obese for my height, closing in on morbidly obese.

My husband was leaving for a year-long deployment.  I decided I could not care for these kids and myself if I did not actually care for myself.  I joined a gym, got a personal trainer and a nutritionist.  I started to phase out the boxed and canned goods and started to cook from scratch (except for Whole Wheat bread).  I lost about 70 pounds in 10 months time.  I was half the wife my husband left.  I looked better.  I still felt bad.

I continued to exercise and work on ways to get more whole wheat (good for you, right?) into my diet: bread, pasta, cereals.  I started to have eczema show up, which generally only happens to me in the winter time, but this was spring.  It had pustules that, when broken, would burn and sting. This was on my ankles, backs of knees, wrists and elbows.  I dealt with it until I had to show skin.  My primary care doctor sent me to an Air Force dermatologist.  Nothing against the Air Force, my son was born at Andrews, but this guy had no clue what he was doing and was beyond narcissistic.  He told me I just had eczema and food would not affect it.  No longer good enough for me.  I wanted answers!!  I was given a blood test that covered so many things my doctor actually had to write justifications for them.

From those tests, I was sent to an allergist who informed me (thank you to his dermatologist wife!!), I had Dermatitis Herpetiformis which is usually associated with Celiac.  He sent me to a gastroenterologist and here I am today, a happy Celiac.  I also had both of my kids tested since it does run in families.  Son is Celiac; daughter has an allergy to wheat.  We have to be wary of other allergies in our house, as well, that we never knew about before I was fed up.  I definitely began to cook more whole foods because of this.

Have you noticed the ingredient lists found on Gluten-Free processed foods?  A lot of rice (white), corn, and nut flours.  My son has a corn allergy.  My daughter has a peanut and tree nut allergy (except almonds).  I can rarely do processed gluten-free foods.  Manufacturers are getting better, especially the smaller companies, but I do not think it is good enough for my family.  So, I cook whole foods and I bake most of our baked goods (exception is Liz Lovely cookies – NOM!!!). I actually took the October Un-Processed food challenge to see what else I could do to eliminate processed foods.  My rule was if I could recognize every ingredient and there were not any preservatives in it, it was good for this challenge.

Now, bring in a special something I was lucky enough to win from this very blog just a few weeks ago.  I won the gluten-free girl and the chef cookbook package!  When I saw I won, I screamed “YES” and I jumped up and down all over the place.  I actually scared my family.  You see, I WANTED this cookbook (it was in the Amazon cart just waiting for the click, but I thought I’d try anyway).  It was whole foods.  Right up my alley.  I am comfortable enough with my cooking/baking skills to substitute whatever needed substituting.  Perfect timing??  I’ll say, YES!

Heidi was nice enough to ask if I’d like to be a glutadoodle and I excitedly agreed.  I have already made a few recipes from the book: Multigrain Waffles (NOM!!), Seared Scallops with Boulangerie Potatoes and Bacon Butter (NOM!!!), Gluten-Free Focaccia Bread (redundant in a GF book? Still NOM!) and tonight was Trout with Almonds, Grapes, Quinoa, and Kale with a Lemon-Marjoram Vinaigrette.

Pardon the socks, I had just returned from a kid birthday party and didn’t have time to change. This trout recipe was very good.  We used local rockfish (which is suggested in the sidebar).  I live along the Chesapeake Bay, so it is rockfish season!!  I got some local kale and shallots. I could not find fresh marjoram so I used dried.  It came together very quickly.

I made the vinaigrette earlier in the day so the flavors could blend and the dried herbs could reconstitute.  I started the quinoa in my rice cooker before anything else.  I then began on the fish which was super easy to do (always should be).  The fish tasted buttery and melted in my mouth!  Get local seafood if you can.  No “fishy” taste.  I had never cooked kale before so it was a new ingredient.  I have cooked collard greens before, so I figured it would be similar.  I was right.  It was easy and fast but too tart for the kidlings.  Easy!  Six thumbs up (eight if you include mine)!!  We’re going to use the leftover fish for fish tacos tomorrow night.  Thanks to very little seasoning on the fish, it is easy to use in another dish.

Diane just began a blog of her own, called “A Walk in the Park,” so be sure to stop by and read about her amazing life adventures.

If you are interested in sharing your gluten sensitivity story and/or a favorite gluten-free recipe on my blog, please contact me at: