Detecting Gluten in Food: The differences between Lateral Flow and ELISA testing 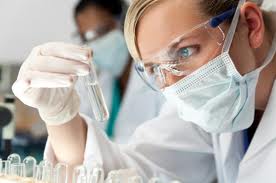 Last time Heidi was kind enough to have me guest post, we talked a bit about the ways that different antibodies are used to check foods for gluten — and I ruined Where’s Waldo for a few people.

Today, I want to talk a bit about the way different tests use those antibodies to check foods for gluten. Rest assured, no cartoons were harmed in the making of this post—but it’s a long one, I’ll warn you.

Generally speaking, antibody-based gluten tests fall into two categories: lateral flow devices and ELISA tests. Both types of test have a place in modern gluten detection—many companies use both in their quality control practices. But, have you ever wondered what these words actually mean?

Well, let’s start with what the tests have in common when it comes to gluten:

With lateral flow devices (hereafter LFDs), the extracted sample (in solution) is applied to the end of a test strip of some sort.  The test strip is essentially a piece of paper, with the antibody and colored beads preloaded at strategic parts. The solution, which is full of maybe-gluten, flows laterally along the strip—laterally!—until it reaches the antibody. 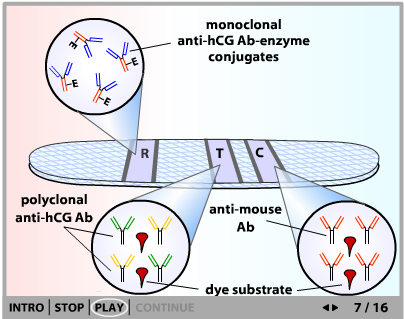 If the antibody finds something to latch onto, the colored beads get activated and a positive test line appears.  This is the same process as with a home pregnancy test, which are also lateral flow devices—except of course those antibodies are looking for pregnancy hormones instead of a gluten fragment.

Heidi demonstrated this in her post on Gluten Free Boxed Cereals when she tested several brands of cereal and some vital wheat gluten flour with the GlutenTox Home Test Kit:

Just like with a pregnancy test, the answer is qualitative: either the test finds the specific fragment of gluten it’s looking for, or it doesn’t.  A lateral flow test can only tell you yes or no.

There are, of course, plenty of variables and even a few exceptions.  But in general, the above is what you’re looking at when you look at an LFD.  Among their advantages: LFDs are comparatively inexpensive to produce, easier to use, can be read by the naked eye, don’t necessarily require lab equipment, and provide accurate results fairly quickly.

Enzyme-Linked ImmunoSorbent Assays, or ELISAs, are more complex.  They take longer, they require highly specific lab equipment, temperature controls, and they’re more costly to produce and run.  Outside of gluten, one of the most commonly-discussed uses for ELISA testing is checking blood for antibodies to HIV.

Within the world of gluten detection, ELISAs are important because they allow greater degrees of fine-tuning and specification. Unlike qualitative LFDs, ELISAs are quantitative: results are not yes/no, but a specific quantity (usually mg/Kg or ppm when we’re talking gluten).

Like LFDs, ELISAs also involve introducing the sample to an antibody and seeing if there’s a match.  Instead of the antibody going on a piece of paper, though, it generally winds up affixed to the bottom of a PVC tray.  The extraction process is more involved, as is the process of trying to get the antibody and the potential antigen to bind together—at strategic times, at specific temperatures, different solutions are applied to the tray and then washed off.  If the antibody finds what it’s looking for, an enzyme that linked to it will do its job and change the color of the enzyme’s substrate, indicating the presence of gluten.

Also unlike most LFDs, ELISA tests are not read by the naked eye.  Instead, a reading machine compares the intensity of the color of each sample to the colors of a positive and a negative control. By analyzing the color, the machine can determine precisely how much gluten is in the sample. Pretty neat, right? 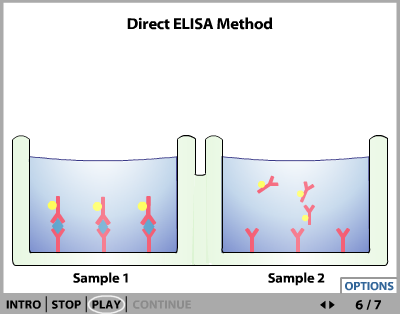 The two most common types of ELISA test when testing for gluten are Sandwich and Competitive ELISAs. To explain the differences very quickly:

Sandwich ELISAs try to trap any gluten in the sample between two layers of related antibody. This is good, but misses out on any molecules that have been processed, fermented, or hydrolyzed enough to break into pieces that only have one epitope. Depending on the sample and the antibody, these small pieces could still be toxic.

Competitive ELISAs, on the other hand, make any gluten in the sample compete with a known antigen for landing spots on the antibody. The nice thing about a competitive ELISA is that it can find even fragments of potentially toxic molecules, because it only requires a single epitope to catch something.

If you’d prefer a more technical explanation, I recommend the following links:

Sinauer Associates and Sumanas, Inc. have great step-by-step illustrations of both types of ELISA test as well as lateral flow pregnancy tests.

Thermo Fisher Scientific have good technical explanations for the different components of an ELISA test (NB: they sell many ELISA tests but none for gluten).

The National Institutes of Health’s center for Translational Therapeutics also has a good overview with simple illustrations of both Sandwich and Competitive ELISAs, as well as another kind called antigen-down.

As a quick summary:

Phew! That wasn’t so bad now, was it?  If you made it all the way down here, go get yourself a cookie or some sushi or a gold star sticker: you earned it!

Filed in: Featured, Gluten Free 101, Gluten-Free Guest Posts, Is That Gluten-Free?, The Science of Gluten