Today’s post on gluten proteins and antibodies is brought to you by Emily of GlutenTox Home.  In case you missed Emily’s first post here on Adventures of a Gluten Free Mom, you can check that out here.

In my head, gluten looks like Waldo.  Really.  I imagine lots of microscopic men in glasses and stripes running amok through my food.

Weird?  Maybe.  But it’s a useful image for talking about gluten detection, so bear with me.

Gluten is a blanket term encompassing the proteins found within wheat, barley, rye and related grains.

Back to wheat etc.:

There are several different types of protein that, combined together, we refer to as gluten. The two most concerning are the glutelin and the prolamin.  In wheat, the prolamin is called gliadin. In barley, it’s hordein, secalin in rye.  In oat it’s called avenin (we’ll talk about oats some other time).  The glutelins are usually just called glutelins, but in wheat they are called glutenin.

Thanks to the beauty of genetic diversity, there are also going to be slight differences in the structure of some of these components from one plant to another (different alleles).

So, let’s pretend that Waldo = a gluten-containing grain. His physical person is starch, and all his accessories are components of gluten. We’ll say the 33-mer peptide is the pompom of his hat. Waldo himself? Harmless. His hat, shirt, glasses? Mostly OK. That pom-pom? One bad mamma-jamma. 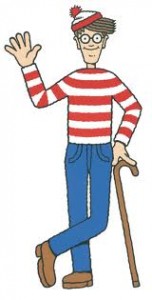 When the first generation of gluten-detection kits came out, no one knew about the 33-mer peptide. Scientists developed an antibody that looked for something they did know about: the ω-gliadin molecule. Umm, let’s say this is Waldo’s magic walking stick. The Skerritt antibody searches for Waldo by searching for his walking stick. Yes.

Usually, Waldo has both his hat and his walking stick. Finding one usually leads to the other. So this antibody was a big breakthrough for the celiac community when it first came out. Still, it has some weaknesses, including significantly under-representing barley. To continue my metaphor, it’s like the Skerritt is generally sharp but really bad at scenes where Waldo is on the beach.

Other antibodies have been developed since then. The Gluten-Free Dietitian has a great review of them if you’d like more details, but in brief: The R5 searches for a specific chain of amino acids on the α-gliadin molecule, and the Morinaga antibodies, being polyclonal, look for several different sites at the same time. They’re both much more reliable than anything that came before, but each has weaknesses, including difficulty with hydrolyzed foods and over- or under-representing barley.

The G12 antibody, which isn’t in the article above, was developed after we learned about the 33-mer peptide. It looks for a sequence of amino acids that’s found only there, only in that toxic peptide (disclaimer: I distribute a test kit that uses this antibody).

Now in reality, gluten gets mixed up and turned around and heated and stretched and broken apart and makes even the toughest Where’s Waldo puzzle look like child’s play. The bonds between molecules and peptides can and do change and shift, and the more processed the food, the trickier it is to find the right molecules.

What’s important to understand is that different antibodies look for different components of gluten. When a test for gluten comes up positive, this means the antibody in the test found enough the specific thing it measures to register as positive. As our understanding of the protein deepens, so does our ability to accurately predict which foods are likely to trigger a reaction — but it isn’t a simple task with a simple “yes or no” answer.

Of course, there are other moving pieces in any gluten detection test, each of which has a significant impact on the test’s success rate. We’ll talk about this more next month, when I go into the differences between ELISA tests (Enzyme-Linked ImmunoSorbent Assays, complicated tests requiring much lab equipment and much specialized knowledge) and Lateral Flow Devices (easier and quicker to use, but without some of the benefits of ELISAs).

To read more about wheat starch and celiac disease, see this article by Donald Kasarda, Ph.D. (Dr. Kasarda sits on the medical advisory board at Columbia University’s Celiac Disease Center).