How to Make The BEST Gluten-Free Turkey Gravy

posted on November 9, 2011 by Adventuresgfmom 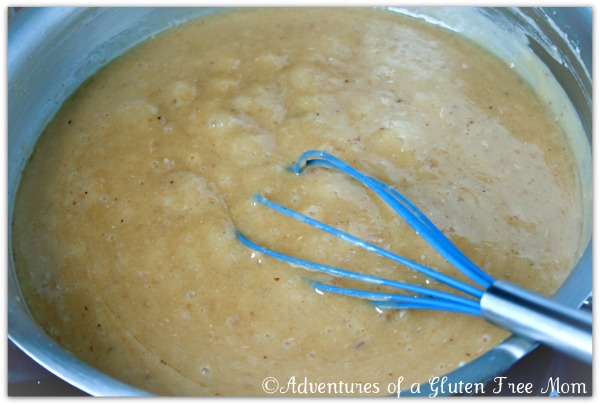 What is Thanksgiving without the gravy?  Just an ordinary meal in my opinion.  I could honestly go without most of the Thanksgiving feast, as long as I have gluten-free sage dressing drowning in gluten-free turkey gravy.  And maybe some canned cranberry sauce.  Admit it, cranberry sauce is just not nearly as interesting when its not in the shape of a can.  What’s a Thanksgiving plate without those perfect little gelatinous circles of red stuff on it?  😉

My Thanksgiving dinner guests ALWAYS ask me how I make my turkey gravy.  They sop it up feverishly, almost as if their lives depend on it.  Not being one to hoard all the gravy goodness for myself (unlike my dad who always tried to ration the gravy or liquid gold as my dad and I liked to call it when I was growing up – if he had had his way, we’d each have gotten only get a tablespoon worth, LOL!).

Thank you dad for all the heartwarming and hysterical gravy memories, I love you. 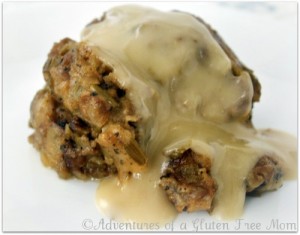 This is one of those “not really a recipe” kinda recipes, so below you will find a photo tutorial to go along with my notes.  On Turkey Day, just take your laptop or iDevice into the kitchen with you and follow along.

Okay, so once the turkey was done roasting, my dad would always remove the turkey from the roasting pan and allow it to rest for about 30 minutes so the juices wouldn’t run dry.  Next, he would put the roasting pan across 2 burners on the stove top and bring the drippings to a boil.  Dad would then add flour to make a roux, and then he added water to thin it out into gravy (this is where the fighting began, who got to be the lucky duck taste tester?).  Salt and Pepper to taste.  Easy Peasy.

What NOT To Do When Making Gluten-Free Gravy

The first time I attempted making this gravy after going gluten-free, I added tapioca starch directly to the pan (no, I did not make a slurry first). I was mortified at the sight before me..a snotty, boogery D.I.S.A.S.T.E.R!

Never, ever…EVER add a starch (tapioca, potato, corn, arrowroot, etc.) directly to a pan of hot liquid, the starch molecules will seize up into gelatinous little balls that very closely resemble contents that belong in a Kleenex tissue.

Have a provided you with a clear enough image?

So what are you NOT going to do?

Let’s say it together now – Do. Not. Add. Starches. Directly. To. Hot. Liquids!

When my second gluten-free Thanksgiving rolled around and I was determined to have my side dishes swimming in a pool of gravy on my plate. I saw someone had mentioned using Tom Sawyer’s gluten-free flour in an online forum so I bought some (without holding my breath).

I repeated the process and by George, if the gravy heavens didn’t part and the Turkey angels sang “Gobble, Gobble, SCORE!!!”

This is when I broke out and did the funky gluten-free chicken dance.  You know what I mean, and don’t tell me you haven’t let loose in the middle of the grocery aisle at one point or another because you discovered a new gluten-free item that you’d been longing for!  Ya know, the dance that moves your children to hide underneath the grocery cart? The dance that alarms the store manager, so he calls 911?

You know the dance. 😀

Now let’s make some gravy, shall we?

How to make the BEST Gluten-Free Turkey Gravy

(Above) Order yourself some Tom Sawyer’s Gluten-Free Flour right now. You need to allow time for shipping. They have a sampler size, so you can start small until you see if you like it. I keep a 5-lb in my freezer to use in all my gravies and sauces. 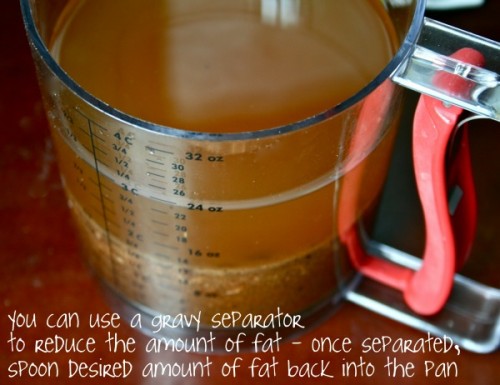 (Above) We never used a gravy separator growing up and I still don’t, unless I have a dinner guest who needs to watch their fat intake. 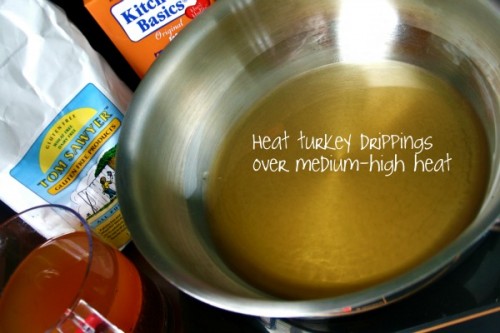 (Above) Heat up some of the turkey fat…or in my case, just dump it all in. 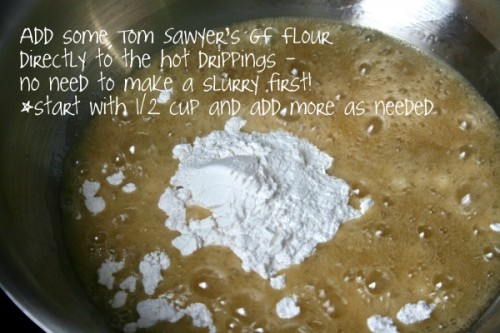 (Above) Begin by adding 1/2 cup Tom Sawyer’s Gluten-Free Flour and add more as needed (depending on how much turkey dripping you have).

(Above) Do not fret when your roux looks like this, it’s supposed to!  Add chicken or turkey stock (or water) and whisk continuously until you develop the consistency you’re after. I like my gravy on the thicker side. **If you used a gravy separator, don’t forget to add back the flavorful juice at the bottom of the separator.**  Now taste the gravy.  Add salt and pepper if desired. 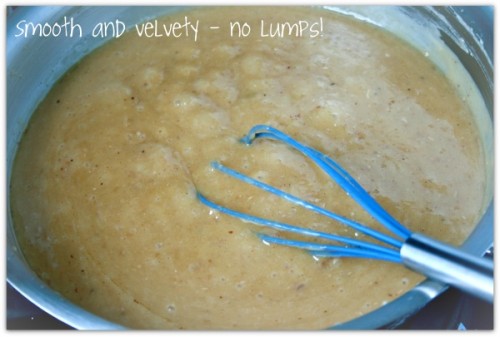 1). To increase the volume of gravy, I add chicken drippings that I have collected and frozen. Beginning in August, when I roast a chicken to use in a soup or casserole, I reserve all of the drippings and store in a container in the freezer. When Thanksgiving rolls around, I thaw the drippings and baste my turkey with the chicken drippings instead of chicken broth. I can easily double the amount of gravy this way. There can never be too much gravy. 😀

2). I always roast the turkey neck and add the shredded meat to my gravy, yum.

3). After chilling in the fridge, the gravy will be thick and solid. So for leftovers, I heat some of the gravy in a saucepan over the stove top, and thin it with some water if necessary.