posted on September 16, 2010 by Adventuresgfmom

Okay, here it is!  This is so exciting for me, I never imagined being able to enjoy toasted ravioli again.  Not only is the toasted ravioli in the above photo gluten-free, but it is also allergy-friendly too!

This post is now linked to a great series that the lovely Jenn (a chemist!) over at Jenn Cuisine is doing called Gluten Free Substitutions. Seriously, who better than a scientist to teach us about the craziness called gluten-free baking?? 😀

The first time I had toasted ravioli was about 10 years ago, 5 years before my celiac diagnosis.  Mike and I had found a little hole-in-the-wall Italian restaurant when we were still dating, and we quickly became regulars.  One night, we splurged on toasted ravioli and cheap Chianti, you know the type that comes in a straw-wrapped bottle?  While I can’t say the wine was anything to rave about (especially given the morning-after headache I had), the toasted raviolis were another matter.  One bite into the deep-fried puffy pocket of pasta dough, filled with seasoned ground beef and dipped in homemade marinara sauce and I was over the moon.  Mike often teases me that he thinks I kept dating him because of all the toasted ravioli and cheap wine.  Maybe, I say with a wink.

Actually, I would definitely say that those nights in the dimly lit Italian restaurant were the setting for the beginning of a true love affair, and I had no idea at the time what an amazing journey I was about to go on with the most compassionate and selfless man I have ever known.

When I was handed my celiac diagnosis in 2005, I seriously mourned the loss of that Italian restaurant.  Not necessarily for the toasted ravioli, but for the precious memories that I would never be able to relive with my husband.  I also felt guilty.  Guilty that by default, my husband had lost the chance to relive those memories too.  Want to hear something funny?  I felt so guilty that I actually told my husband to leave me, so he could go find someone else that he could enjoy toasted raviolis and cheap Chianti with, LOL!  Yep, I was in the dark pit of emotional hell back then.  Luckily for me, Mike had a much healthier attitude towards food and life than I did at the time and his positive outlook and support brought me back, only as a new and improved version of my former self. 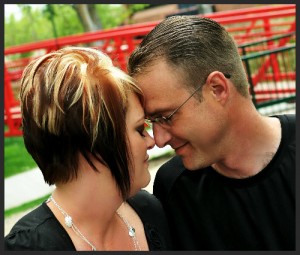 I’m not sure why it took me so long to try and make my own gluten-free toasted ravioli, but I presume it had to do with never having made homemade pasta in my life, let alone stuffed pasta!  I assumed it would be time consuming and challenging given the nature of gluten-free flours, but I could not have been more wrong!  Pasta dough is different from the batter based doughs that are typical in gluten-free baking.  There is not a lot of moisture in pasta dough, which makes it really easy to work with.

You don’t even need to invest in expensive pasta machines or ravioli presses (unless you are a kitchen gadget addict like me).  Simply roll out the pasta dough, cut into desired shapes, add a little bit of filling, fold over the dough, wet the edges, press, seal and Tada!  You have made ravioli.  Easy peasy my friends, I promise. 😀

I think Mike and I fell in love all over again this weekend, only this time, sans the cheap Chianti headache and the toxic toasted ravioli, LOL!

To make the ravioli, I used the gluten-free, allergy-friendly pasta dough (click the link for the recipe).  I also used this recipe as my guide for beef ravioli filling.  I will re-post the recipe here so I can note my substitutions in an easier to understand format.

1/2 lb. Ground Beef (or use ground chicken or turkey.  I also think making a ground up mushroom paste would be tasty!)

1 Garlic Clove, minced (I just grated the garlic clove with a microplane grater)

1/4 cup minced Parsley (I was out of fresh parsley, so I just added 1 Tbs. each of dried Basil and dried Oregano)

Salt, to taste (what’s great about making your own is that you can control the amount and type of salt you use; low-sodium salt is a great alternative.  If you are using the grated Parmesan cheese, you don’t need as much, since it is a salty cheese).

In a skillet over medium-high heat, cook meat, onion, and garlic until all pan juices evaporate, onion is tender, and meat is browned.

Remove skillet from heat; stir in parsley or other herbs, cheese if you are using it, and salt to taste, then egg or flax-egg.

Cover and refrigerate filling until you are ready to use it.

The following is my attempt at a photo tutorial for making ravioli without special pasta gadgets (I just used a rolling pin so my ravioli were a little thicker than it would have been had I used my pasta roller, which can get the dough pretty thin). To see a video tutorial by an actual professional making fresh ravioli, click here (just pretend he is working with gluten-free dough…lest you start to “itch” like I did simply by looking at his toxic ball of gluten)!

Depending on the size of the ravioli you are making, place a small amount of filling (1/2 tsp. – 1 tsp.) on the dough (right below the half-way point).  Moisten the edges of the dough with water.

Yes, I made my ravioli one by one…I will definitely go with the long sheet method next time! 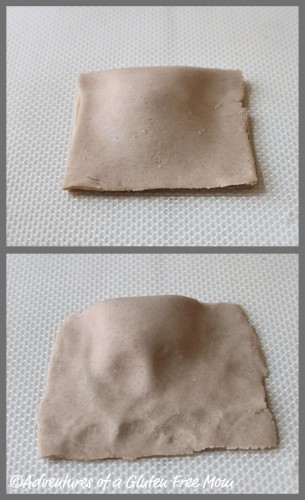 Fold the dough over the filling and press on the sides to seal the ravioli (if you don’t get a good seal, your filling will leak out when you cook them). 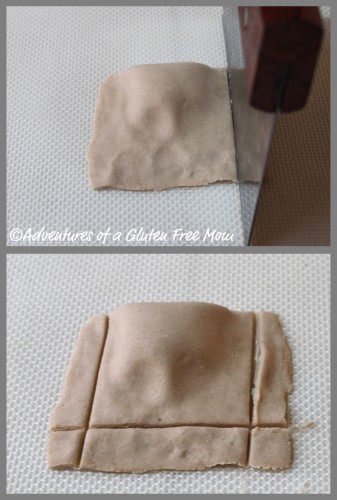 I trimmed the edges to make them look a little nicer… 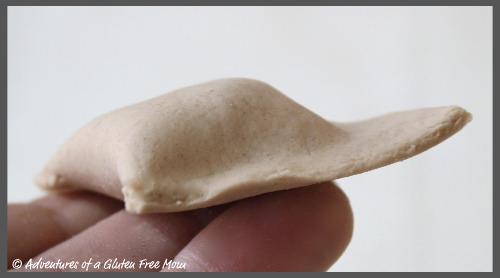 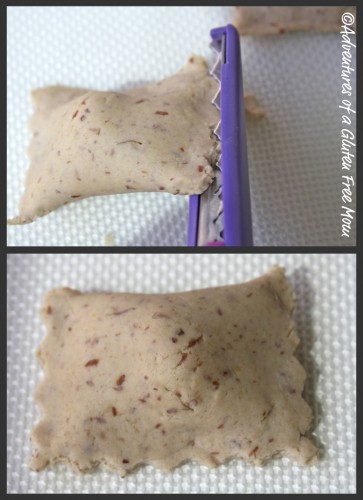 Yes, that’s right…I used my decorative paper scissors to beautify my spotted ravioli!  😀 This batch of pasta dough is spotted because of the flax egg I used.

At this point you can add the ravioli to some lightly salted boiling water and cook for just 2 – 3 minutes.  Drain and top with your favorite sauce: 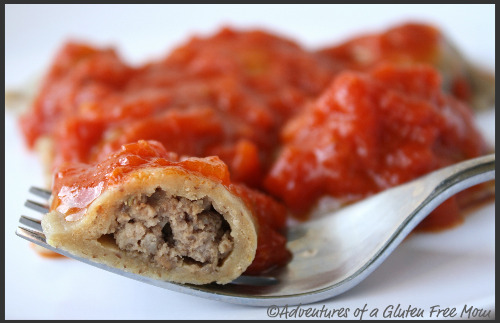 OR, skip the boiling water and make toasted raviolis instead!

I used this recipe by Giada De Laurentis as my instructional guide, and just made the appropriate ingredient substitutions, super simple!

Not in the mood for toasted ravioli?  Well, how about some pizza rolls instead? 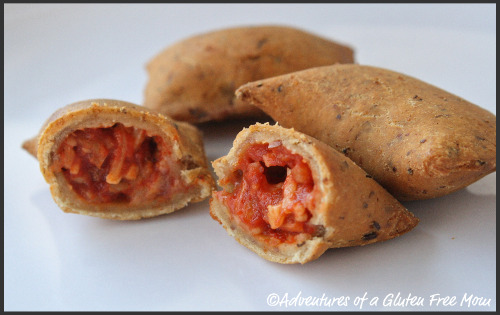 To make the pizza filling, I followed this recipe for Easy Homemade Pizza Rolls that I found on the Better Batter Gluten Free Flour website.  I simply swapped the mozzarella cheese for Daiya’s Mozzarella Shreds, used Applegate Farms Pepperoni, which are gluten-free and casein-free.  I made my own pizza sauce (for the first time ever), using this recipe that I found on AllRecipes.com.  It is so simple, you don’t even cook it!  Everyone thought it tasted just like Ragu pizza sauce, but because you make it yourself, you remove the risk of cross contamination! 😀

Are there any particular gluteny foods that you miss due to the special memories surrounding them?  If so, would love to hear about them!